​Terrance Richmond was born in East Oakland, California and was raised on those ‘mean streets’ by his single mother, aunts, and his devoutly Christian grandmother. His burning passion for the young people of this troubled generation, his personal effectiveness and ability he shows to lead with purpose, led him into a series of experiences working with troubled youth. Terrance works in group homes, youth centers, hospitals, and on the streets. His work with young people is an effort to respond to the growing problems, neighborhood violence, and the unmet needs of gang-involved youth struggling to survive and manage their lives.
He currently serves as the Youth Pastor of New Birth Church in both Oakland and Pittsburg, California under the leadership of Bishop C. Carl Smith. He is an accomplished speaker, teacher, recording artist and mentor to others. Terrance has also been given the great opportunity to be one of FCA’s, (Fellowship of Christian Athletes), speakers. He has addressed students, professionals, social workers, counselors, parents and teachers, about life on the streets. His focus is on the importance to youth of adult attention, guidance, encouragement, and unconditional love. Terrance currently shares his musical gift and inspiring testimony in high schools and colleges.
Musically, Terrance has been inspired by the soul of the 60’s and 70’s. He used to listen to his mom sing and dance while cleaning the house and while as she entertained family and friends at home. He was inspired growing up by the leadership and voice of Martin Luther King Jr. but when it came to his genre of music as a kid, people like Common, Roots, Mos Def, Jill Scott, Erika Badu, were some of his inspirations. But as his heart began to turn and burn for God, he gravitated to artists like Lecrae, Da TRUTH, Andy Mineo, Trip Lee and so many others.
In May of 2014, Terrance Richmond will be dropping his Sophmore album although he has put out 4 “FIXTAPES”, making this his sixth project. This talented young man has wisdom beyond his years, being old enough to have tasted the world before the crack epidemic of the 80’s but young enough to relate to a generation crying out for “real love” while being bombarded with so many temptations and distractions. He is determined to be a father to a fatherless generation and make sure the world knows he was here, because of his “Love in Action” for the people. Terrance lives his life on a Love Quest.

Born in Yellowknife and calling Vancouver home, Warren grew up singing in the church, steeped in the rich tapestry of gospel music. At the age of 15, Warren began singing lead in a soul gospel choir under the direction of Checo Tohomaso, former backup singer and keyboardist of Marvin Gaye, Lionel Ritchie and the Commodores. It was under Checo’s mentorship that Warren developed his craft through studying the ways of Motown and channeling the essence of soul greats.
An accomplished recording artist, songwriter, musician, producer and entrepreneur, Warren also heads a growing entertainment empire known as Studio Cloud 30. Since its expansion in 2010, Studio Cloud 30 has quickly become one of Canada’s leading artist development companies with several divisions under its umbrella, including boutique imprint label 30 Records, SC30 Talent, and the Top Line Vocal Collective.
In May of 2011 Warren released his critically acclaimed debut album ‘Vintage Love’ (30 Records/Fontana). ‘Vintage Love’ was a collaborative effort produced by the incomparable Mike Southworth that featured contributions from R&B songstress Divine Brown, The Prague Philharmonic Orchestra, Printz Board (Black Eyed Peas), Andrea Martin (Roc Nation) and a song penned by legendary songwriter Diane Warren.
‘Vintage Love’ garnered national praise from publications such as the Toronto Star, Vancouver Province and Montreal Mirror, which listed ‘Vintage Love’ as #2 on their top 10 R&B albums of 2011 in the company of Jill Scott, Mary J. Blige, R. Kelly and Jennifer Hudson.
Shortly after, Warren had a successful run on national television appearing on CBC’s Cover Me Canada, where he garnered high praise from music veteran Ron Fair (former president of A&M, Geffen and RCA).
Having been selected to open for the likes of Joss Stone and the late James Brown, Warren’s songs have also been featured on several Galaxie Radio stations, the hit television series Being Erica, and campaigns for Abercrombie and Fitch, Hollister and Gilly Hicks.
Warren is currently represented by Mitchell Davis of the The Artist Partnership, son of music mogul Clive Davis.
A humanitarian, Warren has been active in numerous charities including WarChild Canada.

Karolyn Volbek
​
Captivating songstress, Karolyn Volbek defines what a true vocalist is. A staple in the Vancouver music scene, Karolyn has over a decade of performance experience working alongside some of the industry’s best musicians. Drawing her inspiration from “big voices” such as Alicia Keys and Jessie J, Karolyn’s flawless vocals resonate power and control.

Karolyn’s experience includes performing as a lead vocalist for the VOC Sweet Soul Gospel Choir, being a demo recording vocalist for Steelhaus Creative, and providing background vocals for the New Kids On The Block’s Vancouver tour stop in 2008. It is easy to see that Karolyn channels her love for performing into a passion for teaching. Her instructional style is one that nurtures her student’s natural talents while coaching and encouraging them to expand their vocal range, increase their power and find confidence in their voice. Karolyn teaches voice, songwriting and stage coaching at Studio Cloud 30. 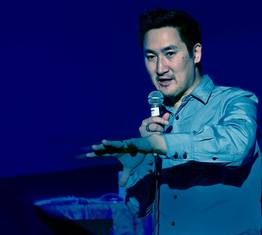 Lead Pastor Jeff Wong is the founder of More Than 12 Church based in Vancouver, Canada. As a musician, producer, and songwriter, he is the visionary behind MT12 Music. His mother, unable to have children, made a deal with God. In exchange for a son, she promised he would belong to Him. Soon after Jeff was miraculously born into this creative destiny.
MT12 Music is a creative and powerful fusion of common urban genres, including electronic dance, hip hop, pop, rock, and soul. Through passionate vocals, rap, djing and controllerism, MT12 Music is a fresh expression of spiritual music.

Jamie & Mandy Rauch with Ethan, Anaya, Izaiah and Thea. We live 30 minutes outside of Vancouver BC Canada. We are all excited to be apart of God's kingdom and His work here in Canada and around the world. The call of God has been strong in our family since 1998. But with no doors opening and no outlet to use for God's purpose we waited patiently. Then it happened! Around Sept 2013 Jamie was in discussion with a friend about his heart to change the film industry, for Good! He was talking about the effect film has on our culture and the way we think and even the way we view things at times, but also the corruption that takes place behind the scenes of the filmmaking process, such as drugs, alcoholism, OD’s, abuse, long hours of work, divorce and over medicating etc. So out of this heart for change, the idea was birthed for Jamie to be a sort of “Chaplain” or "life coach" to the workers of the film industry.

So from that day forth God has been in action, setting this dream in motion. In a short few months The Pentecostal Assemblies of Canada (PAOC), has come on board to partner with us through Mission Canada to be the first Film industry Chaplin to connect and encourage the Christians that are already a part of the film industry and to reach out to and show the love of Christ to those that are searching and lost. To ultimately build a team of like-minded people across Canada that are excited for change and to see the biggest influential industry in Canada to be under Gods leadership!

We can hardly even comprehend the certainty there is in the fact that God is orchestrating all the steps together to see His people in the film business reached, and ultimately the world touched through film and media.

Jamie Rauch has been working in Film/TV and theater for over 20 years, and is an award-winning actor, award-winning film producer and critically acclaimed screenwriter (“Byproduct”). Jamie has been producing and directing films independently since 1994 and owned his first production company at the early age 14, and went on to seeing significant success by the age of 17.

Jamie has published five books. Three of which are  called "Believe - Empowering, Encouraging and Equipping Filmmakers."  "The Art of Filmmaking - How to Make a Movie For Little or No Money." "The 30-Day Screenplay - A Daily Guide to Write Your Screenplay." Jamie has four more books on the way including "So You Think You Have Character? - What An Actor Needs to Know Before 1st Rehearsal."

Jamie was personally trained by Bree Valle who is now the "Director of Dramatic Studies" at "Cuesta College" in California just south of L.A. In 1997 Jamie attended a Shakespearean Acting School in Red Deer Alberta, which largely helped Jamie help train young actors for Juilliard. As well as one of the top rated theater B.A. programs in Canada highly complemented his outline theory on “Characterization.”

Brian serves as the Director of  Mission Canada with The Pentecostal Assemblies of Canada. He is a passionate follower of Christ and desires to see Canadians in every domain encounter Life. He loves to see believers released to their callings and dreams to reach the nations. Prior to serving on the pastoral staff in Orleans, Ontario, Brian pastored in Winnipeg, Manitoba, and Edmonton, Alberta. He can also be found watching, coaching or playing the occasional game of baseball. He and his wife, Bev, have three vibrant teenage children.